This year’s #GreatBritishGameWeek, 7th-13th November 2022, was a huge success. The week-long promotion is a celebration of enjoying wild game, promoted by British Game Assurance’s (BGA) Eat Wild campaign, and aims to introduce new people to all that is great about local British game meat.

This year (2022), UK consumers were invited to join in the celebration via events, dinners, and special offers. BGA organised Game Dinners in Aberdeenshire and London and took our social media following on the road to BGA stockists to show everyone where they can go and buy game. We collaborated on a spectacular celebration of game at Holland and Holland’s Shooting Grounds, and showcased recipes people could cook up at home. We directed our followers to 24 restaurants across the country actively participating in Great British Game Week.Across social media, a huge, brand-new audience engaged with enticing game recipes. On the EatWild account alone we reached 37.1K accounts throughout the lead up and during Game Week.

“The atmosphere and buzz around Great British Game Week this year has been astounding. Our mission for the week is always not only to encourage more people to taste game for the first time, but to educate them about the multiple benefits of eating it and make cooking with it an accessible joy. This year, people have really engaged with the celebration and we’re incredibly proud of what we have achieved in reaching a wider audience and sharing the delights of eating and cooking British game meat, with huge thanks to all the fantastic establishments that got involved.”

In the lead up to Game Week, BGA hosted a ‘British Game’ evening at The Wharncliffe Restaurant in Rotherham where Jackie Litchfield, one of the Rotherham-based diners on the evening, said

“I have never eaten game before and I loved every course and trying all the different game options; I will definitely be eating game again!”

“I haven’t eaten much game other than duck…so it was great to try a range of wild meat that’s sustainable, nutritional and tasty.” 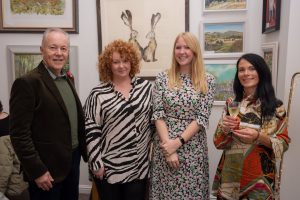 “I had never eaten pheasant or partridge before and was surprised how great it tasted. It complimented the Indian spices very well and was incredibly succulent. I will definitely be eating it again!”

“The eating of game is much more sustainable than many other meats. These animals live in the wild and are not reared and filled with antibiotics like much of the meat / fish we see today. Game lives in abundance in the UK and part of our duty is to cull animals such as deer to help their populations grow and remain healthy. We are trying to promote the understanding of this and to encourage people to eat more thoughtfully and sustainably. For our game evening last week, we worked with Ross Jones from Seven Cherries Catering Company who creates unique carbon impact reports. Using our menu, Ross was able to prove that the total emissions from our event using game such as venison, pheasant and rabbit are 21% lower than if we used traditional meat components such as beef, pork and chicken.”

Following on from the week-long promotion, BGA are encouraging people to continue celebrating game, to share their game experiences where possible, and spread the word with friends and family.

In a continuation of Game Week, BGA are hosting a ‘Celebration of Game’ dinner at Westminster Kingsway College, London, on 7th December (18:30-21:30). The dinner will aim to introduce more people to game, whilst celebrating Westminster Kingsway College and its commitment to teaching the chefs of the future about seasonal British produce. British Game Assurance CEO, Liam Stokes, will be on hand to discuss the benefits of eating wild game and the plans the BGA has for the future. At £55.00 per head, guests can expect three glasses of wine throughout the evening and a spectacular three course dinner.